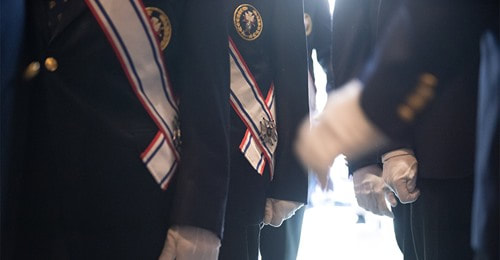 Who Are the Fourth Degree Knights?
The ​Patriotic Degree reminds us of our duty to God and country.
by Andrew Butler11/8/2019

They are the Knights on Main Street, the men you probably envision when someone says Knights of Columbus to you. They’re present in their distinct uniform at civic and Church events, acting as honor guards and color corps, or standing in respect at the funerals of members or during adoration of the Eucharist.

But there is more to being a Fourth Degree member of the Knights of Columbus than a uniform. They're the men who have chosen to embrace the Order’s fourth principle of patriotism, the men who lead the efforts to reach out to veterans and active military and to embody the fact that one can be a faithful Catholic and also be a faithful citizen.

When the Knights of Columbus was founded in 1882, three principles united its members: charity, unity and fraternity. At that time people feared that members of the Catholic faith owed their entire allegiance to the Church and could not be trusted as citizens of their country. Patriotism was added to the Order’s principles in 1900, based on the idea that Knights are loyal to both God and country.

Members who wish to live out patriotism together can join “the Fourth Degree.” Members of this degree have the special honor of holding the title “Sir Knight,” participating in color and honor guards and organizing programs that promote Catholic citizenship. They also become part of a Fourth Degree Assembly in their area. There are more than 3,500 Fourth Degree assemblies around the world.
“It is important, particularly in this day and age, that our Fourth Degree Assemblies encourage active Catholic citizenship and foster the spirit of patriotism in our members and the community at large,” Supreme Master Dennis Stoddard said.

The Serving Those Who Served program is a major initiative of the Fourth Degree supporting Veterans Affairs facilities. The Knights of Columbus has representatives at almost every Veterans Affairs medical clinic in the United States, where they recruit and manage K of C volunteers in developing activities and programs that aid patients’ most essential needs.

The Fourth Degree has also supported priests, in particular those who go on to serve as military chaplains. Through a special scholarship program, the Knights helped fund the education of seminarians preparing to become Catholic chaplains in the U.S. Armed Forces.
​
Dennis Stoddard, our Supreme Master said Fourth Degree assemblies help Knights to put their faith, and their love of country, into action.

“The fourth principle ‘Patriotism,’ commits our members to the preservation of our Church, our Order and to the many nations where Knights serve,” Stoddard said.

Check out how Knights of Columbus assemblies are putting their faith in action for God and country around the world:
• St. Francis of Assisi Assembly 2058 in Sierra Vista, Ariz., teamed up with nearby councils to host a K of C Silver Rose at two local parishes. They organized Masses, rosary prayer services, as well as a procession with a Silver Rose and a statue of the Virgin Mary to mark the feast of Our Lady of Fatima.
• Assemblies from Michigan collected clothing, cleaning products and personal care items to donate to homeless veterans in southwest Michigan through the Battle Creek VA Medical Center.
• Holy Spirit Assembly 2890 in Simpsonville, S.C., honored the military service of 13 Knights from St. Mary Magdalene Catholic Church by presenting each veteran with a certificate and memorial quilt provided by Quilts of Valor Foundation, a nonprofit that crafts patriotic quilts for U.S. service members and veterans.
• In the Philippines, Kalayaan Assembly 2749 in Muntinlupa City cleaned Our Lady of the Holy Rosary Chapel and painted the stairways leading to its entrance in preparation for the feast of Our Lady of the Rosary.
• Members of Bishop Fenwick Assembly 100 in Norwalk, Conn., provided an honor guard at a Mass remembering the victims of the Sept. 11 attacks. The Mass was celebrated by the assembly’s chaplain at Notre Dame Health and Rehabilitation Center.
• Members of SSG. Joseph F. Fuerst III Assembly 3036 in Tampa, Fla., and family members prepared roast beef sandwiches at a local residence where families of patients at a veterans’ hospital can stay for free. They also organize a monthly dinner at the Fisher House Foundation, which helps military families stay together during a medical crisis.
• Members of Father O’Donnell Assembly 393 in Methuen, Mass., provided an honor guard at a bilingual prayer service at St. Mary’s Cemetery in Lawrence on the annual National Day of Remembrance for Aborted Children. More than 80 people gathered to pray at a statue installed by the assembly commemorating the unborn.
• Mgr. Louis Joseph Arthur Melanson Assembly 1994 in Moncton, New Brunswick, hosted a day of reflection where Archbishop Valéry Vienneau of Moncton spoke on the Church’s teachings on medical assistance for the dying.
The world needs Knights who will stand up for God and country. Become a member of the Knights today.
VISION & GOALS
Standing Firm in Support of the Order, Knights of the Patriotic Degree are dedicated to the personal development and continued honor of brother Knights. We are always there to offer leadership, guidance, and encouragement.

Proudly Serving the Country
Knights of the Patriotic Degree glorify God by serving our communities and nations as though Christ were the one being served.

Unwavering Support of the Faith
Knights of the Patriotic Degree hold unwaveringly to what is right and honorable, working to keep God in the civic arena, serving the life of the Church, and defending laws that recognize the sanctity of life and true religious liberty.

Honoring the Legacy of Knighthood
The Color Corps is an elective division of the Patriotic Degree that presents a visible reminder of our service to the community.

Old Glory “The Flag of the United State of America”. “We Love It and Shall Ever Defend It”. The Flag represents freedom, liberty, Patriotism, Our Constitution and Bill of Rights. Fourth Degree Knights act on these principles and what is right and honorable. “How”? By supporting and defending truth in the public arena. Protecting faith in civic life, such as the American examples of “One Nation Under God” in the Pledge of Allegiance and “In God We Trust’ on currency. Funding, restoring, and serving in Church initiatives and events. Patriotism, the Fourth Principle of our Order is Loyalty to that Principle. Fourth Degree Knights hold unwaveringly to what is right and honorable. Fourth Degree Knights are committed to building lives of character.
Patriotism and Pride in one’s nation is the driving force behind more than 250,000 Forth Degree Members in over 2,200 Fourth Degree Assemblies. The Fourth Degree is the highest and most prestigious degree within the Knights of Columbus. It is a group of outstanding Sir Knights who are dedicated to the service of their Church, their country and our Order. These men are unified in the Fourth Degree when duty extends beyond our own lives, beyond how we lead our families and into how we serve our fellow man.
Honoring the Legacy of Knighthood: The Honor Guard is an elective division of the Fourth Degree, whose distinctive presence in parades, wreath-laying ceremonies, Flag Retirements, wakes/funerals and Catholic functions is a visible reminder of our service to the community. Honor Guard members wear their colors with pride and honor, knowing they represent the best of the Knights of Columbus.
The need for strong role models has never been greater. If the sanctity of life, family values, and true religious freedom are to survive, democratic nations need greater commitment from people of faith. That’s what the Fourth Degree Represents. We are the pinnacle of Knighthood. We live, serve and protect the truth.
It’s an Honor.